I never regret reading this series because it always results in me reading this book, probably the best in the series, on par with the second book.

This book has skipped two years since the last book, very similar to the last book in the Mediator series, and Mia's life has developed along the storylines that were set up in the ninth book. This is the longest book in the series, but deservedly so considering it has so much to tell and so much suspense to keep you reading. It is well written like the other books in the series, and I think part of the reason I like this one so much is because the character of Mia has been written like she has matured and it's not as annoying to read as the sixth and seventh. My favourite characters were Michael, Lilly and Boris, Michael was lovely and sweet, Lilly knew just when to butt out and when to state her opinion, and Boris was just extremely cute and nice to Mia. 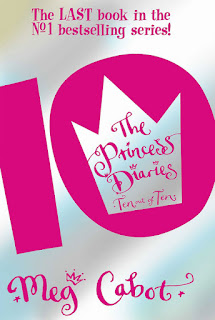 Michael has returned to Manhattan, Mia has written a romance novel and is trying to get it published, and JP has written a play. Michael flirts with Mia throughout the book and they end up kissing while Mia is still dating JP. Mia's book gets a publishing deal and JP frowns upon it, as well as being unsupportive of her novel, JP's play is actually about him and Mia, although grossly exaggerated on his part. Michael donates a CardioArm to Genovia to help Mia's dad win the election and then saves her on prom night after she breaks up with JP. She learns from Lilly that JP broke up with her because Mia and Michael had broken up and he wanted Mia not Lilly, he also lied to Mia about being a virgin as Lilly told him she had sex with him, and he also had been calling the paparazzi whenever he and Mia went out to get his name in the papers. Michael and Mia reunite, as do Mia and Lilly, and Mia decides to go to Sara Lawrence for college.
Posted by ClareBear