This book marks a bit of a rise for the series coming out of the six and seventh books. It adds a bit of a twist to the storyline to make things more interesting.

This book starts to include samples of Mia's writing as well as her grades from her english teacher which acomplishes two things; it makes you hate Mia's english teacher along with her, and makes you realize how serious she is about writing. This book shows the events leading up to Mia and Michael's break up and in this book I'm sure it's not my future knowledge that makes me hate JP. I probably didn't have a favourite character because they all annoyed me in some way or other so because I just enjoy the little snippets of them I'm going to say Fat Louie and Rocky because they both are so cute and cheer Mia up, also they can't really talk so they can't say anything that will annoy me. 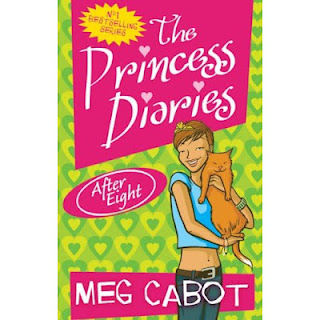 Michael has invented a prototype of a robotic arm that can be used in open heart surgery, he has been invited to Japan to get the actual machine up and running and will be away for a year or more. Mia decides that having sexx with him will make him stay, however the night before he leaves he tells her he isn't a virgin and has slept with Judith Gershner. Mia, of course, freaks out and throws his snowflake necklace at him, symbolising a break up. He comes to school to try to talk about things with her but he comes in when she is hugging JP who convieniently moves his head at the right moment so she kisses him, Michael walked away. She then realizes that she shouldn't have made such a big deal out of the Judith Gershner thing and chases him to the airport but misses him so she sends him an email saying sorry.
Posted by ClareBear