This was the best book in the series, even if the idea of time travel seemed like it was a last minute idea. I enjoyed the plot of this book immensly, and I like how there wasn't an evil ghost in this one, as it would've have been a predictable ending, unlike the actual ending which was very surprising. My favourite character in this book was Paul, even though he was "evil" for the majority of it, I found him hilarious and very entertaining to read about. 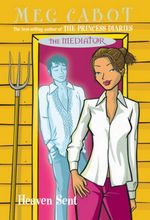 Paul tells Suze that he can travel back in time and he decides to go back in time to stop Jesse from being murdered in the first place. Suze is outraged and when she complains to Father Dominic he suggests that that might've been why Jesse was still around. Suze follows Paul back in time and decides to save Jesse after seeing him alive, however after Jesse kills Diego there is a fire in the barn and Jesse tries to save Suze. When Jesse is holding on to Suze she shifts back to her normal time and accidently takes Jesse back with her. Once there he is in a coma, and the ghost Jesse comes to talk to Suze and is moved by what she has done for him. He then touches his body and he wakes up with all his memories including the 150 years as a ghost. Suze then takes him to her prom.
Posted by ClareBear