I don't like this book as much as the previous two, I thought it didn't have very much of a plot and Suze annoyed me in this book, I hate it when the characters are all angsty and whiny. The only ghost in this book is Craig Jankow, and there is like two sentences about him in the whole book, and after reading four of these books I knew he wouldn't leave peacefully so this book was a bit predictable. The thing that makes it interesting is all the new information about what Suze can do. 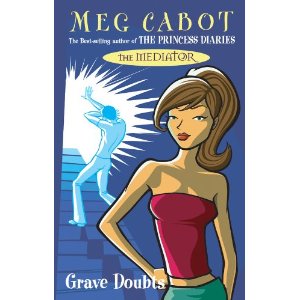 This book is all about how Suze loves Jesse, but he's been ignoring her since their kiss. It is also about Paul, who loves Suze and wants her to be with him, not Jesse. It ends in a massive fight between Paul and Jesse at a party at Suze's house which ends in Suze taking Craig and Paul to the next plain via shifting. Craig is then forced to move on, and Paul returns with Suze to see Jesse has left since his opponent passed out. Jesse then tells Suze that he loves her and has only been ignoring her because he wants her to be with someone she can grow old with.
Posted by ClareBear