I continued reading this series because I like to at least get to the part where she's with Michael because otherwise I'm sad. This book is better than the first one, and probably my favourite in the series.

This book continues from the day after the last book finished, it was originally the first book in the series I read and I read it because it jumps into the twists of the storyline on the first page. This book contains more random lists and things than the last book which gives it a more journal-like feel, I still think Meg Cabot was in her writing element in this diary style series. My favourite character in this book is Michael, there weren't many other prominent characters in this book that were written as well or were quite as nice. Anyone that enjoyed the first book will enjoy this one as well. 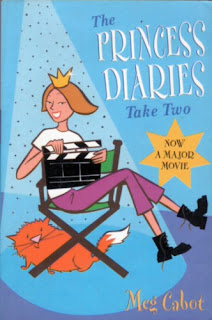 In this book Mia must have an interview for television for which she is stressing about. When asked the vague question "Have you had some exciting news recently?" she tells the world about her mother and algebra teacher having a baby and their pending marriage when the interviewer was simply referring to her algebra grade. This starts Grandmere planning the wedding of a century to which Mia thinks her mother doesn't want, and Mia starts getting anonymous love notes who she hopes are from Michael. Mia's mother and Mr Gianini elope and Mia discovers the love letters are from her biology partner Kenny.
Posted by ClareBear