I own all ten of the books in this series and although I've read them at least twice each it always cheers me up to reread some of them. The first one is not the best in the series, but it's probably one of the better ones.

Although these books are written for girls younger than I am, I think because I read them when I was in that age group I will forever love them. They are really funny and written in the quirky diary style that I think really suits the author. I also really like how the main character isn't a popular pretty girl, she's freakishly tall with frizzy hair and large feet, which is probably why I find it so easy to relate to her. My favourite character in this book would have to be Tina, I know she becomes more annoying later on but in this book she is really sweet and just wants a friend. I would recommend this to any girls between the ages of 10-16 (as a general range) who like to read about misfit girls whose inner monologues can be quite hilarious at times. 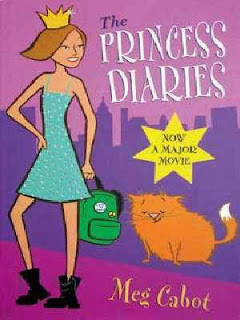 After her father discovers that he is now sterile and can have no moe children, Mia learns that she is the sole heir to the throne of Genovia. The unpopular 14 year old girl then gets asked out by the most popular guy in school only to be humiliated and used for her public status. Throughout the novel, she makes new friends, develops a crush on her best friend's brother and discovers her mother is dating her algebra teacher.
Posted by ClareBear