I bought this book because when I read the back it sounded like the cutest most fanfiction-y book ever, so naturally I had to get it.

This book is told from Audrey's perspective, with interspersed pages of screenpay scripts from the documentary Audrey was making about her family which made for a nice change every few chapters. I actually read this book like 6 months ago and can't properly remember a lot about it because I read it in a day. My main problem with this book was that the vibe that I got from it, even though it wasn't the intended message I think, was that a girl's anxiety can be "cured" by one boy's attention, which is dumb. Also you never find out what the incident that caused her anxiety to spiral actually was, which I wouldn't mind except that the climax of the book revolves around Audrey seeing one of the girls from the incident again. I really loved all the characters though, because it was only her family and Linus that were really in it I found it very easy to understand them all and the dynamics between everyone. My favourite character was probably Frank because it was really easy to sympathize with him when his mother was so weird about technology and he was so nice to everyone anyway, any scene with him in it was usually pretty funny. I would recommend this book to anyone who likes teen romance books. 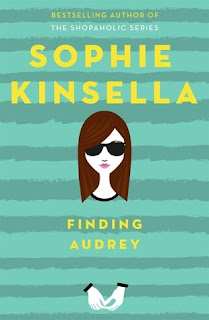 Audrey can't leave the house, she can't speak to anyone outside of her family and she never takes off her dark sunglasses due to some severe social anxiety that she's had since an unkown incident with some girls at school. Her life is basically staying inside her house and going to see her therapist until one of her brother's friends, Linus, comes over and talks to her. Slowly they go from just writing notes to actually going to starbucks together where Linus will dare her to ask a stranger a question and she'll actually do it. When one of the girls from the unkown incident contacts Audrey because she wants to apologize Audrey wants to do it but Linus says she's not worth her time and it will cause her to revert to how she had been before. They fight about it and Audrey gets Frank to come with her to meet the girl. Once there she realizes the girl, Izzy, isn't sorry at all and her parents had just set it up so their daughter could feel better as she's been "upset" since the incident (which we still don't actually know what happened) Audrey and Frank walk out. Audrey then messages Linus and tells him that he was right, Izzy wasn't worth her time, but she was also right because she didn't go back to how she had been before she met him. He doesn't reply to her messages so to try to lessen her anxiety she goes for a walk in the park and falls asleep. Her family freaks out and her mum blames Linus because when he comes to help he tells them that he only just got her text message but the mum says she had been fine until she met Linus. Once they find her she apologizes for falling asleep to her family and her and Linus reunite then they all go to the gaming competition that Frank had been arguing with their mum about for the whole book.
Posted by ClareBear