I'd heard a lot about how good this book is online and then one of my friends was amazed when she found out I hadn't read it, I decided to eventually get around to it but when yet another friend just brought it to me one day when we were hanging out because she was sure I'd love it I finally read it.

This book is told mainly from Celaena's persective but it often has snippets from Chaol, Dorian and occaisonally Kaltain. This book actually took me a long time to get through which I think is weird because it was really good, I loved Celaena and I loved the plotline but for some reason in the middle of the book I found it pretty slow. This book does have a love triangle, and although Celaena is written as a strong individual who wants love rather than is fought over like an object (my favourite kind of love story), I also find both boys equally as loveable and I don't want either of them to be heartbroken (my least favourite kind of love triangle) so I ended up very conflicted and worried about who she will pick in the end. My favourite character in this book was Celaena, she was amazing, strong and independent but still lonely and in need of a friend, also she loves dogs. I also really enjoyed Chaol, I thought his slow development of feelings for Celaena was so well done and I found scenes he was in were always more fun with his wit. I would recommend this to anyone who likes fantasy and to anyone who loves a stong female lead. 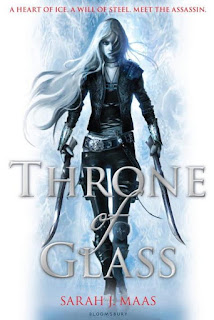 Celaena Sardothien is the most famous, and best, assassin in Erilea except she was caught and has been working in the dangerous salt mines for a year. Prince Dorian arrives and wants to sponsor her to become his father's, the King's, future champion. She must participate in tests and then win a final duel between her and the other possible champions and if she wins she will have to serve four years for the King and then she will be freed. She agrees because her only other option is the salt mines and once in Ardalan she develops a friendship with both Chaol, the captain of the guard, and Dorian, both of whom she starts to develop feelings for as well. She also has a develops a close friendship with Nehemia, the princess of Ellwye who is rumoured to be a rebel and who tells her that the strange marks around the castle are called wyrdmarks. Something in the castle is murdering champions in a very brutal way and after a while Celaena starts to suspect Nehemia. Celaena discovers a secret passage in her room that contains Elena's, the first Queen of Ardalan who was half fae, tomb among other passages including one that leads outside the castle past the gates. She chooses to stay because Elena's spirit tells her she must win and defeat the evil that is killing people in the castle, a few days before one of the last tests Celaena goes into the tunnels and finds Cain, the other champion who has been gaining strength the entire competition, summoning a ridderak, the creature that has been killing champions. Celaena defeats it but is wounded and when she returns to her room Nehemia saves her. She also starts kind of dating Dorian, who is madly in love with Celaena and can't see a future without her, so Kaltain poisons Calaena before her final battle with Cain. Calaena would have lost except Nehemia summons Elena who destroys all the spirits Cain has gathered to help him and all the extra strength he has gathered from them. Calaena then wins and Chaol stabs Cain after he tries to stab Calaena in the back after she's already won. Caleana then breaks up with Dorian as she doesn't think they can be together if she's the King's champion and she doesn't want to get attached to him because she's going to leave when she's granted her freedom.
Posted by ClareBear