I got this book as a christmas present because I was enjoying the tv show, and although it is very similar to the show, I still really enjoyed it.

I really enjoyed this book but I suggest that if you're interested in reading it you try the show first because they are incredibly similar, especially at the start of both and the book is really quite long. I didn't think it would be able to interest me as much as it did because it is set such a long time ago but I didn't have any trouble powering through it once I was really involved. It took me such a long time to getting around to reviewing this that I can't really remember all the characters that well, but I'm pretty sure my favourites were Jamie and his sister, Jamie because he was always making me smile throughout all the drama in this book (until the last part) and his sister because she created an excellent dynamic between both her and Claire and her and Jamie. I would recommend reading this book if you like good drama and romance and don't mind a historical setting. 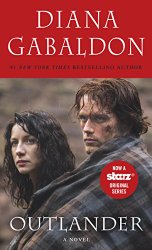 Claire Randall is thrown back in time away from her husband Frank to Inverness Scotland where she meets Jamie Fraser when he saves her from Frank's ancestor Captain Jack Randall. He is part of Clan MacKenzie who all take her back to their home Castle Leoch where she can work for them as a nurse. Randall wants to take Claire in for questioning so Dougal, the second in charge, weds her to Jaime to prevent that. Claire falls in love with Jamie and when he leaves for another job and she is left at Castle Leoch on her own and she is put on trial for witchcraft along with her friend Geillis. Jamie saves Claire from being burnt at the stake, but as they are leaving she sees Geillis has a smallpox vaccine scar, indicating that she was also from the future. Claire then tells Jamie the truth about where she's from and he takes her to the stones where she originally travelled through time and leaves for a motel so she can make up her own mind if she wants to return. She picks Jamie and he takes her to his home, Lallybroch, where she meets his family. Jamie is still a wanted fugitive and is taken by the British to Captain Randall, who then captures Claire when she tries to rescue Jamie. Jamie then gives himself to Randall if he frees Claire, and Randall rapes him all night until Claire, Murtagh and their new ally MacRannoch save him. Claire patches up his wounds and they then travel to a monastery in France where Jamie has family so he can heal, but he is psychologically traumatized and Claire ends up drugging him and reenacting his rape so he can fight back this time. The book ends with Claire telling Jamie she is pregnant, even though she previously thought she was barren.
Posted by ClareBear