My friend lent me this book because we kept seeing stuff about it everywhere and she thought I'd enjoy it, I was a bit surprised by how much I enjoyed it and I can understand why it's so popular.

The book it told from the perspective of Don Tillman, who it is implied has some from of Asperger's or autism so it is quite interesting in that respect. That's really the only thing that makes this book any different to other romance novels though, instead of it being overly romantic it is usually quite funny in most of the situations Don and Rosie get into. My favourite character in this was either Don on Rosie, Don is adorably cute when he's thinking about Rosie, and Rosie was just plain old hilarious most of the time the best parts of the book are definitely when they are together. I would recommend this book to anyone who likes a quirky romance. 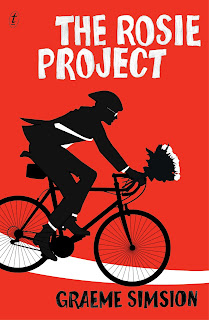 Don Tillman wants a wife, so he creates a questionnaire to help him easily eliminate bad candidates and find good ones with the help of his friend Gene. Gene sends Rosie to Don for something unrelated, however he mistakes her for a wife candidate and takes her out to dinner. He discovers that she is trying to learn who her biological father is and because he is a professor of genetics he decides to help her, even though she is not a suitable candidate to be his wife he likes her and wants to spend more time with her. After many different situations together Don eventually realizes he wants to marry Rosie despite her not fulfilling any of his criteria and he proposes to her. She rejects him because she says he doesn't feel love like everyone else and he doesn't really love her, this causes him to realize that he does in fact love her and he convinces her to marry him and they move to America together.
Posted by ClareBear