This Star Won't Go Out: The Life and Words of Esther Grace Earl - Esther Earl with Lori and Wayne Earl (2014)

I preordered this book as soon as John Green mentioned it in a video and at first I was wary about reading it, but after reading it I don't think this book will ever leave me.

This book is a compilation of words by and about Esther Earl, a girl famous in some internet circles for inspiring so many before she died of thyroid cancer at the age of sixteen in 2010. I don't pretend to know Esther, I joined the nerdfighter community a few months after she had already left it and I personally hate it when people pretend that they knew a person after they've died, but I think that many people who read this book, myself included, can't help but feel a connection to her. Her original works of fiction are at the end of the book and I found myself not wanting that portion to stop, it didn't feel like I was reading a story written by a 15 year old, but someone who had spent a mountain of time working on their own book. Reading a book about someone who knows they are dying is incredibly hard, but I would recommend this book to anyone because I think everyone can be touched by her words and her story. 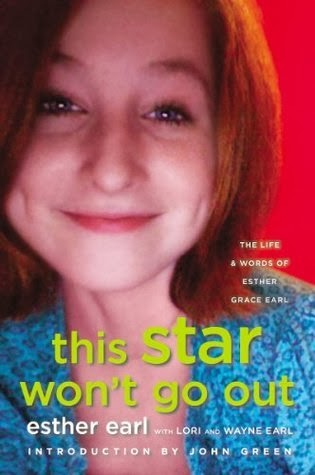 The introductions are by John Green, author and Esther's friend, and Lori and Wayne Earl, Esther's parents. The first section of the book is about thirty pages of photos and childhood stories about Esther and her family written by her parents, then there is a brief summary of her medical journey. The main part of the book is a mixture of exerpts from Esther's journal and blog, entries by her parents from the CaringBridge page and exerpts from Skype conversations between her and her internet friends. The next to last section is letters from all her friends and family members from last year about how Esther touched their lives, and her father's eulogy from her funeral. The last fifty pages are original works of fiction that Esther had started but never got to finish.
Posted by ClareBear