I saw this book in a discount book shop for eight dollars and after watching Carrie Hope Fletcher say wonderful things about it I couldn't pass it up, and I'm really glad I didn't.

I read so much stuff about people calling this series the new Harry Potter, but I think it's unfair to compare anything to Harry Potter as it will always recieve such harsh criticism that way. This series doesn't really have many similarities to it anyway, one is about wizardry and the other clairvoyants, the only similarity is just coincidental as both are a seven book fantasy series written by a british female. Andy Serkis has a production company that has also picked up the movie rights to this book, so it also might become a movie. I really enjoyed this book, even though it was a bit confusing for the first half trying to get used to all the new words and extra confusing for the first chapter before I discovered the glossary in the back. I really like intricate fantasy worlds so I'm looking forward to more books in this series and I'm really excited to see all the new things that can happen in seven books of this world. My favourite character in this book was Warden, not because he was the love interest, but because I thought that learning more about his character and reading the dialogue that Paige had with him was some of the best and most interesting parts of the book. I would recommend this book to anyone who likes fantasy worlds and big intricate series. 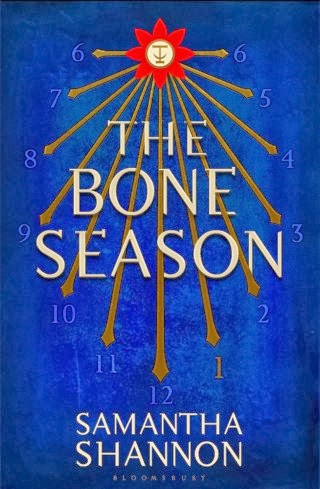 Paige Mahoney is a dreamwalker, a particularly rare type of clairvoyant who works for an association of other clairvoyants in a world where being found to be a clairvoyant is a sentence to death or a lifetime of torture. After accidentally using her gift to kill two guards on a train, she is captured and taken to Sheol I, a society run by otherworldly clairvoyant creatures known as Rephaites. She learns that once every ten years, the Bone Season takes place in Sheol I where they take all clairvoyant prisoners from the government and train them using any methods necessarily to become soldiers for them against the Emite, a vicious race that only Rephaite or well trained clairvoyants can defeat. Paige is taken by Warden Arcturus Mesarthim, who she learns is the blood consort (engaged to basically the queen of the Rephaite) and has never a human pupil before. She soon makes some friends and learns that escape is nearly impossible without Rephaite help and two years ago when the Rephaite did help, one human betrayed their escape plan and everyone was slaughtered except the Rephaite who helped, who were severly tortured as an example. Paige soon learns that Warden was one of the Rephs who tried to help the last time and he helps her escape, successfully, this time.
Posted by ClareBear