After loving both of Rainbow's other books and reading the pretense of this book I had to get it and it was such a wonderful read.

I don't know whether this book is better for me because I am a fangirl and I understand absolutely everything that Cath mentions when she's thinking about such matters, but I thought this book was wonderful. Once again Rainbow has a really cool concept, writing a book within a book, as well as fanfiction based on the fictional book, I can only imagine how much time it took to think of all that content. I always find her characters relatable in ways that many authors don't often delve into and this book is no exception, in fact I thought Cath, the main character in this book was so much like me (and I'm sure many other girls who spend a large amount of time online) that at some points it was really freaky. One of my favourite parts was where she described herself as "an eighteen-year old nerd who knew eff-all about boys or parties" and I felt as if she was describing me. All the anxiety, antisocial tendencies and love for nerdy guys makes me relate to this book and love it all the more, and I don't know whether she did that purposefully but I'm sure that it will make many other girls love it for the same reason. My favourite character in this book was Reagan, she was a great balance of sarcasm and love that it made me wish she was in it a bit more. I would recommend this book to any person who likes young adult love stories, or any fangirls. 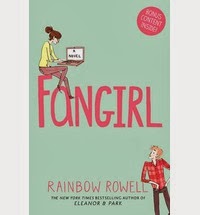 Cath and Wren are twins who are moving to university, they've always been obsessed with a book series called Simon Snow and although Cath doesn't really want to go, Wren tells her she should and that they can't be roommates. Cath finds it hard with all the new scenarios but she soon finds friends in her roommate Reagan, Reagan's boyfriend Levi and a boy from her writing class and although Wren thinks she's stupid for still clinging to her love of Simon Snow and continuing her fanfiction on him Cath manages without her. One night when Levi comes to her room and Reagan is out with another guy, Cath helps him study for a test by reading him the book he has been assigned for the class as he has trouble focusing when reading. They end up kissing and then fall asleep together then the next morning when Reagan comes in he leaves and Reagan tells Cath that he's not her boyfriend, he's her best friend and ex-boyfriend from high school. Cath then decides to go to a party at his house that he invites her to that night and Reagan helps her get ready but when they get there they walk in on him kissing another girl and they walk straight out and Cath asks Reagan not to mention it again. She finally calls Levi when her dad is admitted to hospital and she needs a ride home, she then explains to him why she'd been ignoring him and he leaves when she asks him to. When she returns to school Levi convinces her to give him another chance and everything starts to go better for Cath until her sister is admitted to hospital because she needs to get her sotmach pumped. She reconciles with her Wren and her Dad sets Wren rules to follow so she won't end up like this again and when the final Simon Snow book comes out Cath and Wren go to the midnight release with Levi and Reagan and they cry together. The book ends with Cath reading the last book out loud to Levi.
Posted by ClareBear