I bought this book from book depository because it kept being recommended to me by many websites and it sounded really interesting, I'm really happy that I did.

This book reminded me a lot of Glow as it was a futuristic romance set on a spaceship to a new earth. This book was written in chapters that alternated between Amy and Elder's perspective which I liked, both perspectives were well written, but I felt Amy's perspective when discussing being unfrozen and her feelings of isolation were excellently written. Although I worked out the murderer within the first 100 pages, the book still had lots of revalations and plot twists that surprised me, and the plot was so intriguing that I read it within about three days. My favourite character was probably Harley or Steela, they were both strong characters that didn't believe what they were told, and their small acts of rebellion made the population on the ship seem more lifelike and close to reality. I would recommend this book to any dystopian fans or science fiction fans that don't mind a romance side plot going on. 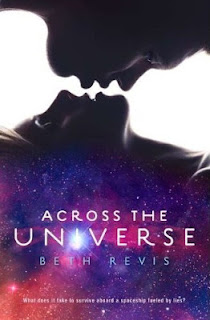 Amy is cryogenically frozen with her parents as they are going to colonize the new earth, however Amy is woken up fifty years early onto a ship that is full of mindless drones. Elder is the apprentice to Eldest, the leader of the ship, and when bodies that are frozen begin to be unplugged he and Amy try to work together to find out who did it. They discover that the ship hasn't been flying for 250 years like they thought but rather 350 years, and it's still going to take another 100 to get to the planet because the engine is having problems. They also discover that Eldest is drugging the people on the ship so they don't have strong emotions, and telling them every forty years that the ship will not land for an extra 25 years and that even though they won't get to see the new planet, their children will. It is then discovered that Orion is really the previous Elder and has been unplugging the frozens that have military experience because he thinks they will use the inhabitants of the ship as slaves when they finally land. He kills Eldest, then Elder freezes him and tells the population on the ship about the actual landing time and decides to stop drugging them.
Posted by ClareBear