I'm continuing to read all the John Green books that could be bought in dymocks and even though this one was the last one they had in stock, I still think it's better than Looking for Alaska.

I really enjoyed this book, although the plotline wasn't the best, the characters were interesting and it was pretty hilarious. It was written from the two different Will Grayson's perspectives, one being written by David Levithan and one by John Green. Although the title may make you think otherwise, I don't think the main character of this book is either of the Will Grayson's, I think the main character (and coincidentally my favourite) is Tiny Cooper, a massively tall and fat gay boy who is just trying to make both Will's lives better. I recommend this book to anyone who loves a good laugh, it's also got the right amount of emotion thrown in to make you think. 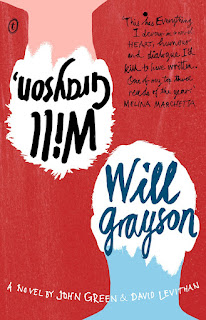 Will Grayson's best friend is Tiny Cooper, Tiny tries to set Will up with Jane however this only gets them into a fight. will grayson met a guy named isaac on the internet and goes to meet him in chicago only to find that his "friend" made him up. When in Chicago will grayson meets Will Grayson who introduces him to Tiny, who he dates for a short time before they have a rough break up. Will Grayson feels bad about fighting with Tiny and starts dating Jane and then makes up with Tiny. After his break up with will, Tiny's stage show, which he has been working on throughout the novel, is premiering and will gets lots of other Will Grayson's to show up and tell Tiny that they appreciate him after the show.
Posted by ClareBear