For the past month or so I have been watching vlogbrothers videos in all my free time and I finally decided to actually buy one of John Green's books so I could be considered a true nerdfighter.

I wanted to read Looking For Alaska first, however I couldn't find a copy of it in dymocks and my friend Helen told me that this one was her next favourite of his so I bought this one instead. This book had a similar plot to Before I Die by Jenny Downham, as it was told from the perspective of a teenage girl with cancer who falls in love with a boy. There are some major differences between the two books that make me like this one so much more. For one, the boy also had cancer which makes the whole whirlwind romance so much more believable, the characters were also much more likeable and the book had just the right amount of comedy in it so it wasn't too depressing but wasn't trying too hard. My favourite character was Augustus, he was so hilarious and so incredibly lovely and sweet that I couldn't help but love him too. I would recommend this book to any Jodi Picoult fans, or any people that like drama/romance books. If you don't want to read it because you don't want to read "a cancer book that will make you cry" I will give you the sage advice that John Green offers to people when they tell him that: "if you don't like this book, you can punch me in the stomach." 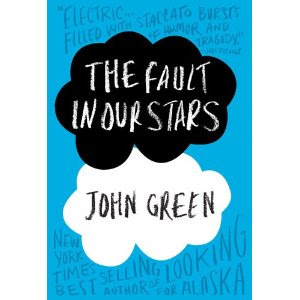 Hazel Grace Lancaster is a sixteen year old girl with terminal lung cancer, she meets Augustus Waters at her cancer support group when her friend Isaac brings him for support when telling the group he needs an operation to remove his cancer that will make him blind. Augustus is immediately attracted to Hazel and they soon start to fall in love and are brought closer together by Hazel's favourite book "An Imperial Affliction". They decide to go to Amsterdam to meet the author of the book, however once they get there they learn he is a big disappointment, however the trip is a success because it's where Hazel and Augustus admit their feelings to each other and they have many exciting travels while they are there. Augustus then tells Hazel that his osteosarcoma is back and it has spread to most of his organs, he is dying. Eight days before he dies, Augustus arranges to hear his own eulogies from Isaac and Hazel at their support group church, even in this moment of extreme sadness he is able to make light of his situation and make some pretty hilarious jokes. After Augustus dies, Hazel gets an email from Peter Van Houten, the author of "An Imperial Affliction", that has her eulogy attached to it because she told Augustus she wanted him to write her eulogy so he sent it to Van Houten so it would be written in a way she would like.
Posted by ClareBear