I bought this book because I had heard a lot of amazing reviews of it, however I was kind of disappointed and I definitely liked The Fault in our Stars better.

The part I found most interesting in this book was all the last words that Pudge had memorized, they were all actual last words of famous people and I found them fascinating. The plot was pretty good, however I don't understand what everyone finds so amazing about this book. My favourite character was the Colonel, I thought he was hilarious and I really loved how much he cared for his mother. I would recommend this to any teen fiction readers, both boys and girls would find this book pretty entertaining, although it gets quite emotional in some places. 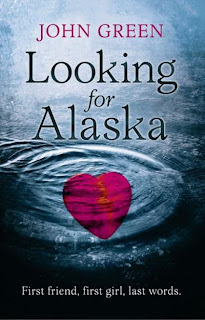 Miles "Pudge" Halter moves to a new boarding school to find his "Great Perhaps" the thing that he may find by abandoning his safe life to go somewhere that may be better or worse. Once there he meets and falls in love with Alaska, an eccentric pesonality that everyone loves. One night after they pull an amazing prank to get revenge on some boys, Alaska gets incredibly drunk with Pudge and the Colonel and demands that they help her leave without being caught as she forgot something really important. The next day they learn that while driving down the I-65 she hit a police car and died instantly. Pudge and the Colonel feel so guilty about letting her leave when she was that drunk that they become determined to find out where she was going and if she hit the police car by accident or on purpose. They find out that she was going to put flowers on her mother's grave because she had forgotten the aniversary of her death, but they don't find out whether it was an accident or a suicide. They decide it doesn't matter and they then pull a prank that Alaska had planned for their senior year which involved a stripper dancing in front of the whole school and dedicate it to her.
Posted by ClareBear