Mac gave me Matched for my birthday last year and I got this one for Christmas. The end of the last book wasn't that big a cliffhanger and I wasn't really dying to read this, however I think this book is an improvement on the last one.

I think this book was better than the last one as it shows Ky's perspective as well as Cassia's, it also had a lot more adventure and excitment than the last one. My favourite character was Hunter, I found him interesting and well written and I hope he is in the last book. 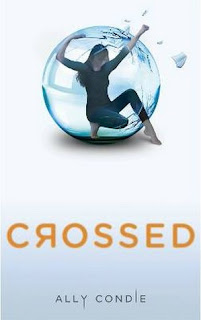 Ky is in the outer provinces as a decoy for the enemy to shoot at, his friend Vick is the only other abberration that has lasted as long as he has. He, Vick and a boy called Eli escape into a maze of hills and canyons, known as the Carving. Cassia and her friend Indie soon make their way to the outer provinces and run to the Carving to find Ky, but before they meet up Vick dies. Cassia soon learns of a rebellion against society known as The Rising and wants to join, however Ky already knew about them and didn't want to join, instead he wants to join The Farmers, a group that lives away from both the society and the rising. Cassia, Indie and Ky end up all joining the Rising and they discover that Xander was already part of it.
Posted by ClareBear