I've read most of Melina's other books and my cousin and I love her books. When she heard I hadn't read this she was shocked and immediately lent it to me, now I understand why.

This book seems like it is just about a girl going to a boys school with only a few other female comrades, but it also explores the fragile mental states of both Francesca and her mother and shows just how much the people in your life matter. I really didn't expect to get as addicted to this book as I did, reading it in just a few hours, but it was just so easy to slip into this world that not only had a relatable main character with a good plotline, but a character that had real problems and issues that I really wanted to be addressed or resolved. My favourite character in this book was Jimmy, I thought he was really loveable even though Francesca didn't really want him around at first I liked how he persisted and she got to know how funny he was, also he reminded me of a friend I had in high school who was also called Jimmy and was very similar to him. I would recommend this book to anyone who likes good fiction, it is a great book that doesn't necessarily take very long to read. 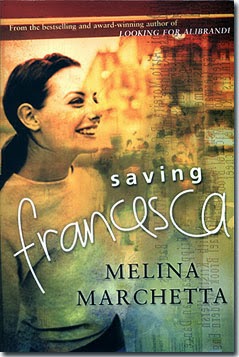 Francesca is starting college at a school that was up until this year all boys, she had to hang out with three girls from her old school that she never really talked to. She wakes up one morning and her mother won't get out of bed, she's had a mental breakdown and Francesca only wants to find out what caused it so she can help her get better but her father won't talk about it and her brother is only ten. She soon develops a crush on one of the school captains Will Trombal, and she learns that her new friends are better than her old friends ever were. She eventually tells her friends about her mum and they all support her and try to help her through it. She inadvertantly offends her friends when she mentions to her old friends that she did nothing for her birthday when they took her out. Then she has a fight with Will when he tells her he's going travelling next year, and on the way home she runs into one of her mum's friends who tells her that her mother had a miscarriage. She then gets home and screams at her father telling him it was all his fault because he never wants to talk about anything and maybe that's what her mother needed. She then jumps a train and sits at the last station for an indetermined amount of time until she decides to call her Dad, he comes and gets her and all her friends and Will are at her house when she gets back. The next day after school her mother comes to pick her and her brother up.
Posted by ClareBear