After reading Eleanor & Park I found out that Rainbow had two other books and when I finally bought this one the other day I couldn't wait to read it.

This book is told from Lincoln's perspective but is interspersed with chapters of emails between Beth and Jennifer which was really interesting to read. At first I found it very confusing to work out which woman was which and who was talking, but after a while I grew to know them and I could just tell who was talking without needing to look at the names, which is I guess what happened to Lincoln as well. I think the concept of this book is so clever and although I could pretty much work out what was going to happen, it was still really cool to get so invested in characters who the storyteller hasn't even met before. My favourite character was Jennifer, I don't understand why Lincoln didn't love her instead of Beth, but I loved how her opinion  on pregnancy changed through the novel and how she changed with it. I also love that once again, Rainbow gave me a hilarious wonderful character who was a realistic size and continued showing her insecurities about it through the novel. I would recommend this book to any romance fans or people who want a different kind of romance book. 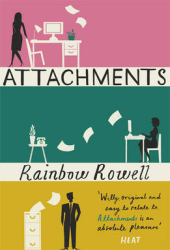 Lincoln is the new IT guy at a newspaper office in 1999. His job is to read through employees emails that are flagged for inappropriate content or large attachments. Beth and Jennifer work at the newspaper and constantly have large conversations via email which start to become the highlight of Lincoln's job. He soon falls in love with one of the girls, Beth, who he realizes has a small crush on him and refers to him in her emails as "her cute guy" and although he often walks past her desk and goes to her boyfriend's concerts he never meets her until one day when he doesn't even realize it's her until she mentions it in an email the next day. Lincoln eventually decides to quit when he realizes how creepy and unhealthy this relationship, if that's what it could even be called, is and he leaves a note for Beth on her desk. Then a few weeks later she sees him in a movie theatre and when she asks him if he believes in love at first sight because she always knew there was something good about him he asks her if she believes in love before first sight because he was in love with her before he even knew what she looked like.
Posted by ClareBear