Mac bought this for me for my birthday a couple weeks ago and I'm not really surprised it became a movie, but even though it was historically based, I found it really engrossing and hard to get bored by.

The story is told from the perspective of Jacob as an old man and when he sleeps, his time in the circus is told from his younger self's perspective. Because of the flashback way the story is told, it reminds me a bit of the notebook, but because of the circus aspect it gave the old man telling a tragic love story some more interest than a normal romance novel. There are authentic circus photos at the start of each chapter which I like, but I think that the writing was descriptive enough on its own to leave them out. My favourite characters were Jacob and his nurse Rosemary, Jacob was a moral, easily understood main character and Rosemary was a lovely presence in his current life.  would recommend this book to any people who enjoyed The Notebook or who enjoy romance novels. 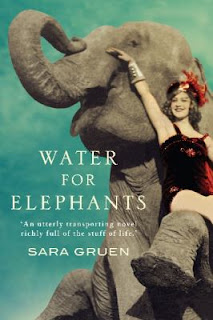 Jacob Jankowski is about to finish his college education becoming a vet when his parents both die, he leaves during his final exam and ends up on a circus train. He soon joins the crew as a vet looking after the animals and develops a crush on one of the performers, Marlena, who is married to the animal coach, August. Soon the circus acquires a stubborn elephant named Rosie who August harshly beats many times as she won't perform. Jacob soon learns that Rosie was trained in Polish and only responds to commands in it, after they make this discovery Marlena and Jacob get closer, however when August attacks Jacob and beats Marlena because he thinks they're having an affair when they're not it just drives them to start having an affair together. Marlena plans to leave August and falls pregnant, but he continues to find her and try to beat her into returning to him. Some men that were thrown off the circus train return and untie all the animals during a performance creating a stampede in which Rosie kills August by whacking him over the head with a stake. Marlena and Jacob move away and have many kids and grandkids together.
Posted by ClareBear