A friend of mine did a speech on this book for english and it sounded really good so my sister bought it for me for Christmas this year, however I was extremely disappointed.

I think this book would have been more enjoyable for someone who has read Jane Eyre or Martin Chuzzlewit as they might have understood some subtle references and jokes that I didn't. Otherwise I thought there was a lot in the book that didn't need to be and it took too long to get to where she enters the book and when she did it was not as action packed and long enough to redeem the earlier boringness of the plot. I didn't really have a favourite character in this book, there was no-one that I was really invested in or I thought brought any extra value to the novel. I would recommend this book to people who enjoy literature and/or nonsense worlds where not much is explained and you have to work lots out for yourself. 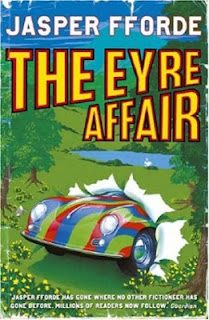 Thursday Next works for LiteraTec, the police division that works on literature crimes. When her uncle creates a portal that can bring people into books, he and the portal are stolen by Archeron Hades and he holds Martin Chuzzlewit to ransom after stealing the original manuscript. Thursday's uncle burns the manuscript so Hades gets Jane Eyre instead. Thurday then follows him into the book and tells the other LiteraTecs not to open the portal again until they read the words "sweet madness" somewhere in the book. She eventually kills Hades and "rewrites" the ending so Jane will come back to Rochester who says sweet madness so Thursday can return and marry the man she loves.
Posted by ClareBear