This is the last book in the series I had to read for english, my teacher says I would enjoy the fourth book so I might read that one later.

I enjoyed this book less than the previous book in the series, but I still thought it was an improvement on the first book in the series. This book had more storyline to it than the first book, which it is quite similar to. It is from a new character's perspective named Arren, who is very similar to a younger Ged except he has Ged as a mentor. My favourite characters in this story were the people of the sea, I thought the concept of a race of people that literally live on the sea is super cool and they brought a nice freshness to the story that broke up the monotony of the journey through the lands. 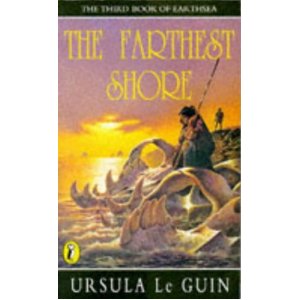 Arren is a young Prince to one of the lands of Earthsea and is sent to Roke to tell Ged, who is now the Archmage, about how wizards in his land are forgetting the ancient language of magic and can no longer perform any magic. Ged and Arren set out on a journey through the lands to find who has been causing this phenomena all over Earthsea. With the help of some dragons they find Cob, a wizard who has opened the door between life and death and can never die, he lures people to him with the promise of eternal life but then takes their power and they cannot return as he did. Ged manages to close the gap that Cob created but loses his power in doing so, Arren then kills Cob one final time and drags Ged out of the realm of death where he had to go to close the gap. Arren is then crowned King of Earthsea and Ged wandered the mountains of Gont alone.
Posted by ClareBear