This was one of the hundred free books that came with my ereader, and last year when I was in Sydney and finished both my books I decided to read this as everyone tells me its a classic and is pretty amazing. It has taken me so long to read it because I found it so boring and hard to read so I read all my other books that I wanted to read before I finished it.

I can understand why this book is a classic, however I wouldn't recommend it to anyone these days unless they had nothing to read and a spare couple months to read it. I can see how it was so controversial in the time period it was written in, and why it became so popular, however I find Tolstoy's habit of putting thoughts in quotation marks confusing, as I never can tell if the character is speaking or thinking. I thought Anna Karenina was very annoying, and only continued reading the book for Levin's storyline. 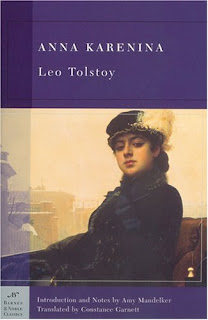 SPOILER ALERT
This book follows two main characters, Anna Karenina and Konstantin Levin, over a number of years. From the very start of the book Levin wants to marry Kitty and he proposes to her at the end of the first part of the novel, however Kitty refuses as she is waiting for a proposal from Vronsky, who she has been spending time with and is in love with. Vronsky does not propose to Kitty, because he has met Anna Karenina, and has fallen into deep love and infatuation with her even though she is already married and has a child. Kitty is heartbroken when Vronsky doesn't propose to her and she falls ill becuase of it. Anna tries to refuse and ignore Vronsky's attention, however after spending time with him, she realises that she doesn't love her husband and never has and succumbs to Vronsky's charm. Anna tells her husband of her affair with Vronsky and he tells her to break it off and they can continue as if it had never happened. Anna becomes pregnant with Vronsky's child and continues her affair with him against her husbands wishes, then has his daughter, Anna, who her husband becomes attatched to. Anna's husband refuses to give her a divorce, and tells her that if she leaves she must leave her son, which she does even though it breaks her heart. Kitty then returns from abroad and meets Levin once again and after a discussion of the past they decide to get married. Kitty soon becomes pregnant and gives birth to Levin's son, Mitya, whom he does not love straight away. Anna does not love her daughter at all, she misses her son and is only staying in this terrible situation because of her love of Vronsky, however she soon becomes jealous and paranoid about Vronsky being with other women, even though he loves her more than anything. This paranoia and depression soon consumes Anna and she commits suicide by throwing herself under a train. Vronsky is then overwhelmed with grief after Anna's death and decides to volunteer to go to a rebel war in Serbia, and Levin finds his faith and realises that he loves his son. Overall this is a good book, but could be written in five hundred pages rather than one thousand, as there is way too much uneccessary political debates in the book that aren't relevant anymore, I'm glad I read it, however there are more interesting books that I would read instead of it.
Posted by ClareBear