Although I've never read artemis fowl, I have read the supernaturalist and I really enjoyed that so when I saw this in an op shop for $2 I bought it.

I really enjoyed this book, although it was slow in places and talked a lot about the mechanics of aeroplanes, it had a nice story and it does that thing where it could be true but you're not sure. I really liked the character of Linus Wynter, who was always determined to stay optimistic even in the darkest times. 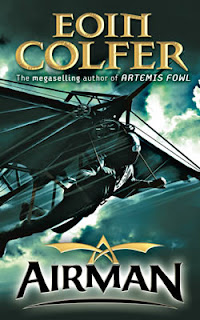 Conor Broekhart was born in a hot air balloon, leaving many people thinking he was born to fly. As he grows up with his best friend Isabella, he learns about the science of flight from his much loved teacher Victor Vigny with funding from King Nicholas, Isabella's father. However, when Conor is fourteen and he and his teacher are on the verge of being the first people to fly, Victor and King Nicholas are murdered by the evil Bonvilain. Conor witnesses this and Bonvilain then sends him to the little saltee prison and tells his family and Isabella, to whom he had just professed his love, that he died trying to protect them. However as a form of psychological torment, Bonvilain tells Conor that his family and friends hate him and think he killed the king. Eventually Conor breaks out of Little Saltee and saves Isabella and his parents from being poisoned by Bonvilain by building and flying the first plane in history. An adventure story with an emotional twist, if you liked Eoin Colfer's other works or any adventure type stories this is a book for you.
Posted by ClareBear