After seeing the trailer for this movie, I thought that I would enjoy the book and as excited as I was before I'd read it, now I'm double that excitement level for the movie.

This book is told through letters and messages like emails and instant messages, which makes the timeline of this book very confusing and annoying. The book ranges from when Rosie and Alex are 7 to when they're 50, but I'd say that probably 450 pages of this 550 page book is in their mid-twenties to mid-thirties. I found this book really hard to put down, I don't know whether it was because it was told through letters, or because I was just that invested in Rosie's life, but I read it in 2 days and I'm so interested to see what they cut out in the movie because it had a lot of plot. My favourite character in this book was probably Ruby, but Rosie makes a close second, they were both hilarious and had me constantly laughing. Without their humour and love for each other I don't think this book would hold up because you would realize how frustrating it is that her and Alex just aren't together. I would recommend this book to anyone who likes romance, especially if you like a lot of build up. 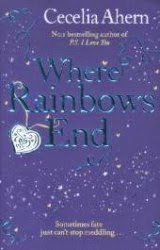 Rosie and Alex are best friends living in Dublin, when they're 17 Alex's father gets a promotion and moves his family to Boston. The next year Alex is supposed to come back to Dublin to take Rosie to her debs (I think it's some sort of graduation dance) before she moves over to Boston to go to Boston college but there's a mix up with his flight and he can't make it, Rosie has to go with Brian the Whine, a hated classmate of theirs, and she ends up drinking a lot so she can stand him and winds up pregnant. She raises Katie, her daughter, in her parents house for the first few years and then gets a job in the same building as Ruby, all the while keeping in touch with Alex who is Katie's godfather. Alex marries his college sweetheart Sally, who absolutely hates Rosie and vice versa and Rosie starts dating an older man named Greg who Alex hates. Sally and Alex have a son, Josh and then get divorced while Rosie gets a receptionist job at a hotel and takes Greg back after he cheats on her. Alex comes to stay and leaves Rosie a letter explaining his love for her, but Greg finds it and hides it from her. Rosie finds out that Greg continued to cheat on her even after she took him back and leaves him, planning to head to Boston to stay with Alex, who is excited so he can profess his love for her, but Brian the Whine, who left town when Rosie was pregnant sends her a letter asking to be part of Katie's life and she decides she has to give him a chance for Katie's sake so she stays in Dublin. Alex starts dating Bethany, his high school sweetheart again, who Rosie has always hated and when he marries her because she's pregnant, even though he told Rosie that he didn't love her, he and Rosie get in a fight and they don't talk for a year. Rosie does night school to get her hotel management degree even though it takes her a year longer than planned because her dad dies the night before her final exams. Her mother dies three years later and Greg sends her the letter Alex left her all those years ago, she doesn't do anything because he's married, but because Katie is living in Ibiza DJing she moves into her mum's house and turns it into her own B & B. Years later when she's 50 and Alex has divorced Bethany, they're both IMing Katie because she ran into her childhood best friend Toby and thinks she loves him because she had the "silence" that her mum always told her about (which was a silence she experienced with Alex before she kissed him before his first wedding) and when Alex realizes she felt the silence too he sends her a letter professing his love for her (again). The book ends with a few pages from third person omniscient perspective telling how Rosie had kept all the letters and emails from the few years and had read over them that night waiting for Alex to arrive, she walks downstairs and falls but he catches her and smiles.
Posted by ClareBear