I bought this book from an op shop because it was fifty cents and I like Meg Cabot. At first thought the pricing was a mistake because surely they could get more money for something with Stephenie Meyer's name attatched, however after reading the book I can see why it was so low.

This book contains five short stories, all about supernatural events happening at a prom. None of the stories were particularly compelling, they were all quite predictable and were nothing I hadn't heard of before. The exception being Madison Avery and the Dim Reaper by Kim Harrison. This story was probably the best idea of the five, however it didn't really have a resolution in the end and I think it would have been better as a full length novel. 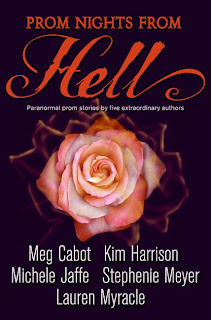 The Exterminator's Daughter - Meg Cabot
Mary tries to kill Dracula's son the day before prom but fails. While doing this she meets Adam, a guy from her school who she's never really noticed before, they fall in love and defeat the vampire at the prom together.

The Corsage - Lauren Myracle
In an attempt to try to get Will to ask her to prom, Frankie takes him to a psychic who gives her a corsage that will grant her three wishes. Frankie then wishes that the boy she loves would ask her to prom so Will then climbs a water tower to spray paint the question on it and falls to his death. On the night of the prom she wishes for him to be alive again and his corpse comes to her house, she then uses her last wish to make him dead again.

Madison Avery and the Dim Reaper - Kim Harrison
At the prom, Madison is dumped by her date and falls into the arms of a handsome stranger. When driving her home, he drives her off a cliff and stabs her. Madison then wakes up in the morgue with two white (good) reapers arguing over who was responsible for not saving her. Madison is like a ghost unless one of the reaper's amulets are close by so she steals one off the black (bad) reaper who killed her in the first place and who came back to take her somewhere. A white reaper is then assigned to be her guardian angel for a year as she poses as a human while they work out why she's so important.

Kiss and Tell - Michele Jaffe
Miranda has superpowers and works as a driver on her day off from boarding school. On the day of her prom she drives a girl named Sibby to somewhere where people are trying to harm her. Miranda helps Sibby escape and then takes her to the prom so they can hide. While there Miranda talks to her crush, Will, who really wanted to go to prom with her. The prom is then evacuated when the police announce a "bomb scare" and the policeman who is leading them is the one who is after Sibby. Miranda then knocks out the policemen and saves Sibby, she takes Sibby to her safehouse and then goes to breakfast with Will.

Hell on Earth - Stephenie Meyer
Gabe is drawn to a mysterious girl called Sheba at the prom. Sheba is a demon who is causing havoc at the prom and when Gabe sees her she can no longer manipulate the people at the prom. She realises that Gabe must be half angel and has no idea, he is drawn to situations where he can help and is unkowningly trying to save Sheba.
Posted by ClareBear