I bought this book at the same time as I bought Daughter of Smoke and Bone (which I didn't post about because I was on a cruise when I read it) and although this has a lot more detail about the chimaera and Eretz, I still enjoyed the first book more.

Although a lot happened in this book, I felt like a lot of it was internal and nobody really did anything until the last moment. The first books constant mystery, although I had kind of half worked it out, kept me intrigued the entire time whereas the constant twists in this book were often predictable and the only one that really had me keep reading until I found it out was Brimstone's. I sorely missed Brimstone's prescence in this novel, and I found the consistent mention of the book's main theme; hope, kept having me expecting him to come around the corner at any moment and I was often disappointed. I enjoyed all the introduction of new characters though and I loved reading from Zuzana's perspective in this book. My favourite character in this book was Zuzana, I found her hilarious, her chapters were always my favourite and her arrival as the Kasbah made Karou's storyline so much more interesting. I would recommend this series to anyone who like YA fantasy. 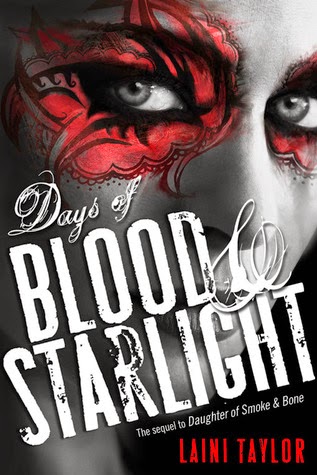 The book starts with Akiva returning to Liraz and Hazael and telling them that Karou is dead and explaining everything that had happened between them over the years. Attacks on angel camps begin and many of the chimaera slaves are set free with a message of hope being spread to them by chimaera that no angels can seem to witness in action. It is discovered that Karou is still alive and has taken Brimstone's old postition as resurrectionist once she was found by Thiago, who made her give all of their soldiers new gruesome bodies to be able to kill angels easily with. Akiva and his siblings start showing mercy to chimaera and hatch a plan to kill their father, Joram, the emperor, while Karou is living constantly under Thiago's watch as he turns all the chimaera against her. When Akiva and his siblings kill Joram, Jael immediately kills the next heir so he can be Emperor and invade the earthly realm, killing Hazael in the process. When Karou resurrects Issa she learns that many of the chimaera souls are trapped in a make do thurible tomb under Lorramendi and when she confronts Thiago with this information in front of the army he immediately gets them back on his side and plans revenge. He lures Karou down to the pit and tries to rape her but she stabs him in the neck and kills him, Ziri then decides to go into Thiago's body so they can maintain control of the chimaera without anyone punishing them for killing him. Akiva and Liraz come to Karou to try to get her to resurrect Hazael, but they did not capture his soul and there is nothing she can do to help them. They go to seal the portals between the worlds so that Jael can't invade Earth but they are too late so the misbegotten and the chimaera form an army together to stop him.
Posted by ClareBear