I first read this series in 2009 and after seeing the latest movie, Catching Fire, on Thursday I had to reread them.

This series is so well written it only takes me a few pages to get hooked into the story, I think Katniss' perspective is very easy to relate to and that's part of the reason everyone loves these books so much. When I look back on the book I'm surprised to see the games take so long, about 240 pages, because I get so drawn in they seem much shorter when I think about that actual part of the book. My favourite character in this book is Rue, although I love Peeta, I just think that Rue was such a standout character in this book without even having many pages to her. I think Rue is probably one of the best characters that Suzanne has in the entire series, and she really makes all the points the book tries to show about poverty, harsh policing of everyone, and meaningless death with her few conversations with Katniss. I think this series is almost required reading for people who can handle a book all about children dying. 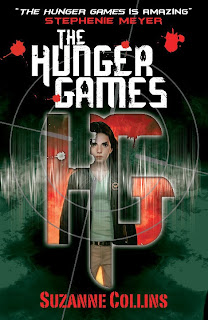 Katniss lives in a future where once a year 24 children are chosen and put in a televised arena where they must fight to the death in what is known as the Hunger Games. When her younger sister's name is drawn to go into the games, she volunteers to take her place and ends up going in with Peeta Mellark, a boy who saved her life when she was younger and was starving, he took a beating from his mother to feed her bread from his family's bakery. Before she goes into the arena she learns that Peeta has loved her his whole life so any way the games end will be terrible for him, her mentor tells her to go along with it so she can get more sponsors and possibly live longer while she's in the arena. After a few days in the arena she learns that Peeta has teamed up with the "careers" who train their whole lives for the glory of winning the games and she must set a nest of tracker jackers, wasps that cause hallucination and sometimes death, on them. She gets stung in the process though and Peeta fights off the careers so she can escape them and he gets wounded in the process. Katniss then teams up with Rue, a small girl from district 11 and while helping her blow up the careers food, she dies and Katniss kills her killer and sings her to her death. It is then announced that there can be two winners of the games if they are from the same district so she goes and finds Peeta. His wound is giving him blood poisoining and she must get the medicine from the cornucopia where everyone else will be getting something else they need from. She gets the medicine after being saved by Thresh, the boy from Rue's district, and she and Peeta both recover from their injuries and go on to win together. It is then announced that the rule is renounced and there still must be only one winner, Katniss get out some poisonous berries and her and Peeta decide to both take them because they have to have a winner and must let them both live rather then having them both die. This turns out to be the case however Katniss is now in trouble from the Capitol having shown such rebellion and Peeta learns that she was faking her love for him he stops speaking to her.
Posted by ClareBear