I really enjoy this series, I think all the books are really interesting and well written so you can't help but read them all in a few days, so of course I bought this book as soon as it came out.

The previous book in the series, The Rise of Nine, is still my favourite out of the four that have been written so far, but this one is probably a close second. I absolutely loved the first half of the book just reading about the group dynamic and all their relationships and training sessions together, reading those sections actually made me realize what an awesome movie it could be if the first one had done better. This book, instead of adding one new perspective to the existing three that were in the third book, they swapped Six's perspective for Sam's and kept alternating between him, John and Marina. I like Sam and understand why they needed to have his perspective in this book, but I hope that he gets swapped out for another Lorien perspective in the next book because I find those more interesting. I've read a lot of theories about Setrakus Ra actually being Loric or even being Pittacus Lore and although I'm skeptical I think it would be a cool plot twist in future books. My favourite characters were Eight and Nine, I've loved Eight since he was first introduced because of his easygoing nature and humour and in this book I loved him for his bravery. I've always just thought Nine was a stereotypical bodybuilder type but with each book he's getting more and more character depth and I'm loving him more and more, I especially enjoy his big brother kind of relationship with Ella. I would recommend this series to anyone who likes good fantasy and adventure, or anyone who likes x-men because they all have kick-ass powers as well. 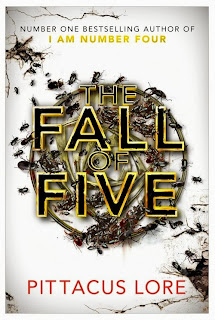 The book starts with Sam being freed from the jail that the Mogadorians were torturing him in by his Dad and Adam, a mogadorian whose story you'll understand if you've read The Lost Files. The Garde has gone back to Nine's setup in Chicago to rest and recuperate after their battle with Setrakus in the last book. Five soon starts sending them ridiculously obvious messages as to where he is and John and Six find him and bring him back to Chicago with them after being saved by Sam and his dad, Malcolm, they learn that Five can fly and has the power of externa, where he can take on the qualities of whatever object he is touching. He immediately clashes with Nine, as his Cepan died when he was younger and he has been living on his own ever since and has terrible social skills. Ella has been having nightmares ever since the battle with Setrakus and she tells John that in them Setrakus talks to her and tells her to read a letter that her Cepan gave her before she died. When she reads it she learns she wasn't chosen to come to earth like they were, her dad was rich and sent her to earth to save her which the rest of the Garde don't care about but her nightmares with Setrakus intensify. Five knows where his chest is buried and the whole Garde are going to get it but the night before they leave Ella's nightmares paralyse her and she can't wake up, John tries to help and is similarly paralysed. Sam, Sarah and Malcolm then stay in the apartment to look after them while the rest of the Garde go to get Five's chest. Five is a traitor and it turns out the Mogadorians found him when he was very young and have brainwashe him to believe that the Mogadorians should take over the world, once on the island where his chest is buried he attacks the other Garde with a creature of his own creation and his legacies which are highly trained as he has been practising against the Mogs. He doesn't want to harm Marina and Eight as they were kind to him and he's sure they can be persuaded to see his opinion, however he immediately tries to kill Nine and just as he's about to deliver the killing blow Eight teleports in front of him and dies instead of Nine (I cried a river). Marina develops a new legacy in her rage whre she can create and manipulate ice and she uses it to pin Five down and stab out his eye, resulting in my favourite line of the book "If I see you again, you traitorous bastard, I''ll take the other fucking eye". John is taken into Ella's dream where she is Setrakus Ra's heir and they are killing the last of the Loric resistance (Sam and Six) he wakes up and the Mogadorians are attacking the apartment trying to get to Ella, they manage to take her but John can't stop them as he decides to heal Sam's dad who was dying. The book ends with Adam showing up to help John fight against the other Mogadorians.
Posted by ClareBear