After devouring both Starcrossed and Dreamless in a few hours each I wasn't going to be left in the dark about how it all ends, and what was most important to me, finding out why Daphne was such a terrible person. Fortunately for me, this book did not let me down and was just as riveting as the other two books in the trilogy.

It is told mostly from Helen's perspective but is told from other character's perspectives when needed. I personally find Lucas' perspective the most interesting to read as you can understand how strong his morals are and see his inner battles between those morals and his own desires. When I was reading this book, I found it very easy to think I'd only read a few pages but when I checked I'd really read one hundred. I think this is a mark of how good Angelini's writing and plot were that I could get that interested in the story and not notice how much I'd read. My favourite character in this book was probably Hades (never thought I'd say that), he was written so I never doubted him or his motives, unlike most other characters, and learning that his compassion for humans was the greatest out of all the Gods really endeared his character to me. 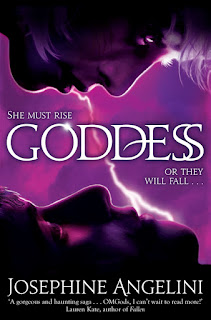 This book starts about one hour after the last one ended with Helen descending to the underworld to try to get Zach to the Elysian Fields, after Hades promises her he will get him there and tells her she is a worldbuilder she returns to the Delos' house to recover from her injuries. Once there she dreams memories of past Helen's, including Helen of Troy and Guinevere and learns that she always ends up with Lucas they've never been cousins in any past life, only other obstacles in their way. They then learn that Orion is a shield to the fates, when he is around anyone the fates can't see them, or in Cassandra's case, possess them. After a couple of days all the other Scion's meet at their house to discuss what they must do now all the Gods have been released from Olympus when Phaon draws a sword, which isn't allowed, Helen gets angry and accidently summons her lightning. To stop her Lucas holds onto her and dies from the lightning, Helen then creates her own world and takes Lucas there so he can heal and Daedelus ends up challenging Phaon to a fight to the death. The next day when Helen returns with Lucas and everyone is relieved after thinking he was dead, they go out to watch the fight. After Daedelus wins, the Gods all appear and Zues challenges her. When she says that she knows an immortal cannot challenge a mortal he picks Achilles as his champion. Matt shows up with the spirit of Achilles in him wanting to kill Helen, and an army of Myrmidons behind him. The scions all then pick a side, with or against Helen, and Hector says he'll fight for Helen as he is her champion. When he slices Matt's heel nothing happens and Matt says it was the "wrong heel" even though he tries both heels, and many other parts of his body Matt doesn't die and instead kills Hector. Lucas then steps up as he was Hector's second and shoots an arrow into the heels of Matt's hand and he dies. Lucas then travels to the underworld and says he'll take Hades' place as head of the underworld in return for Hector's life. When Hector returns Daphne breaks down saying it wasn't meant to be him, she thought Orion was Hades son and would bargain the life of his girlfriend's father from him so she could have Ajax back and everyone learns of her deceit. Helen then goes to the underworld and gets the Eumenides to help her get Lucas out of his promise, she eventually gets them to agree to him not taking the position now, but he will have to do it eventually. Helen then makes herself immortal so she can battle Zeus, she traps him in Everyland (the world she created) and that scares the Gods into stopping the fight on the rest of the Scions. The epilogue ends with her and Lucas spending each day like it's their last on this earth.
Posted by ClareBear