Across The Nightingale Floor - Lian Hearn (2002)

I had to read this book for my english class aand was pleasantly surprised by it.

The book is told from alternate perspectives of Takeo and Kaede, I prefer Takeo's perspective mainly because Kaede is a bit of a wimp for most of the book and Takeo's storyline is more interesting. I found the storyline interesting, but thought it was dragged out too long over the middle couple chapters. My favourite character was probably Shizuka, she was super cute but kick ass when she had to be. I would recommend this book to any fantasy fans, also people that enjoy intricate plot history. 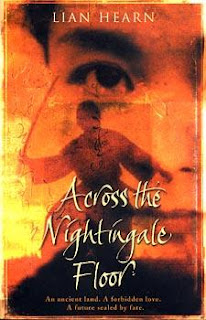 Tomasu's tribe is wiped out by Iida, but before Iida can kill Tomasu he knocks him off his horse and runs away where Shigeru finds him and saves him from Iida's guards. He then changes his name to Takeo and gets adopted by Shigeru who trains him to read and write. He soon discovers that his father was from "the Tribe" so he has inherited many abilities like invisibility and super hearing, Shigeru then uses these abilities to train him to be an assassin. Shigeru is hung from the tower when they discover he was a traitor and Takeo kills him out of mercy then goes to kill Iida only to find that Kaede has already stabbed him in the chest. Takeo then leaves with the Tribe.
Posted by ClareBear