I read this book because Mac said that she thought I would like it after she read it. I saw a box set of the first three for thirty dollars at kmart so I decided to get them.

I quite enjoyed this book, it is very different to the other books in the young adult paranormal genre as it has many different types of creatures. I thought it was well-written and included many rare words which I had to look up in a dictionary which is always good. My favourite character, although it might seem a little cliche, was Jace, I found him hilarious and his personality was really intriguing until the end when he was all weird. I definitely enjoyed this book and will probably have to buy the fourth, fifth and sixth books later. 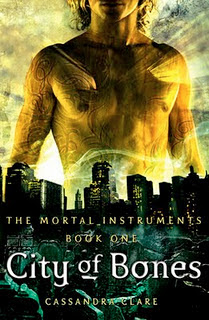 Clary is a normal girl who can see people that no one else can see. She soon learns that they are shadowhunters, and that she must be one of them as she can see them. Her mother is kidnapped, and Clary learns that she was also a shadowhunter and was married to another shadowhunter called Valentine who turned bad and started a massive war and has now returned. Clary then works with the shadowhunters Jace, Alec and Isabelle to find the mortal cup before Valentine does. They get the cup and Jace and Clary fall in love. Jace and the cup then get stolen by Valentine, and Clary goes to rescue them and she learns that Jace is her brother, who her mother thought was dead.
Posted by ClareBear