I bought this on my Kindle because I adore Courtenay. It was a good choice - I love this book! It is quite long, which is no issue for me - the longer, the better! This book broke my heart about five times. I really connected with the protagonist and was sad to finish the book.

The great thing about this book is the neverending series of twists and complications. The protagonist  has to work through a lot and you get to read about her life over a span of several years. In 2004, It was adapted into a made-for-TV mini-series, which I haven't watched, but  I plan to. It was voted best miniseries at the 2004 Chicago International Film Festival. Here is a link to the series on YouTube if you are interested. 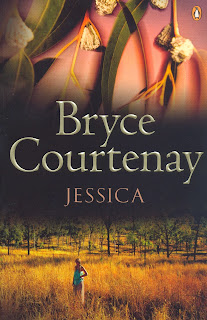 Jessica is a tomboy who works with her Dad on their farm. He gets Jessica a job at the shearing sheds and she befriends two boys her age - Billy and Jack. Her mother and sister Meg have their eyes on Jack as Meg's future husband as he is from the richest family in town. The rest of the boys at the shed dislike Jessica and when they pick on her, Billy stands up for her. A fight starts and it ends with Billy's head being trampled on by a horse. Billy is left with permanent brain damage and is never the same. Jack gives him a job as a gardener at his place, but the rest of his family mistreat him. Jack and Jessica begin to fall in love. One day, Billy is pushed too far and murders Jack's mother and sisters. He runs off and Jess finds him killing her dogs. She manages to calm him and gets him all the way to town. Jack has slowed down the mob and carries Jessica when she collapses on arrival. She feared that if she didn't get him away, a mob of vengeful men would kill Billy themselves and he would never get a fair trial. Jack goes away to war. She then begins to show and her family realises that she is pregnant and she refuses to name the father. The family think she was raped by Billy. She is exiled to a tin shed in the bush and eventually gives birth in a creek with help from an Aboriginal woman, Mary. Her mother takes her baby and passes it off as Meg's. Her father is furious about being tricked and then has a heart attack and dies. At his funeral, Jessica breaks down, screaming that they stole her baby and then is put in a mental asylum. Jack is killed in the war. There she makes friends with a Jewish man and when he is released, he helps get her out with the help of a lawyer. The lawyer also makes her mother give her their old land on the condition that she will never approach her son. Mary's half-caste children are taken and Jess with the help of her friends manage to get them back in a historical court case. She returns to her house to find her dog bitten by a snake, she kills it, but then is bitten herself by its mate. Knowing she is dying, she goes to her hut, where later Mary finds her dead. Mary finds a letter she wrote to Jack, but never sent - telling him that she is pregnant with his child.
Posted by Mac