I read this because a friend told me that it was even funnier than the film. It was not. I found it quite boring most of the time and very repetitive and predictable. I feel that in the movie, you can sympathise more with the main character, whereas in the book you just want to tell them to shut up and get over it. Needless to say, I was quite disappointed by this book. This book is also a reinterpretation of Pride and Prejudice. I drew many similarities between the mothers and love interests in each story.

I think I may be part of the minority as the book sold over 2 million copies worldwide. It won the 1998 British Book of the Year and there is currently a musical in the works - with the lyrics score and being written by Lily Allen. Not to mention the popular film version - which I find hilarious. Here is the trailer to give you an idea. It has Renee Zellweger as Bridget and Hugh Grant and Colin Firthe as her love interests. I love the casting of Colin Firthe as he plays Mr Darcy in the BBC adaption of Pride and Prejudice as well. All in all, I think this story was executed much better through film. 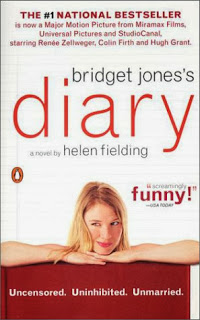 Bridget is thirty and unmarried, which means everyone she meets is constantly asking about her love life. This book is a diary that goes over twelve months. It includes Bridget's quest to lose weight, stop drinking and smoking and find love. Along the way there are many witty comments from Bridget.
Posted by Mac